Welcome back! We are up to #11 and #10! Hope you have been enjoying this as much as I have been. Thanks to everyone who has been reading and supporting me! I could not do what I do without you all! Now enjoy these next two photos: 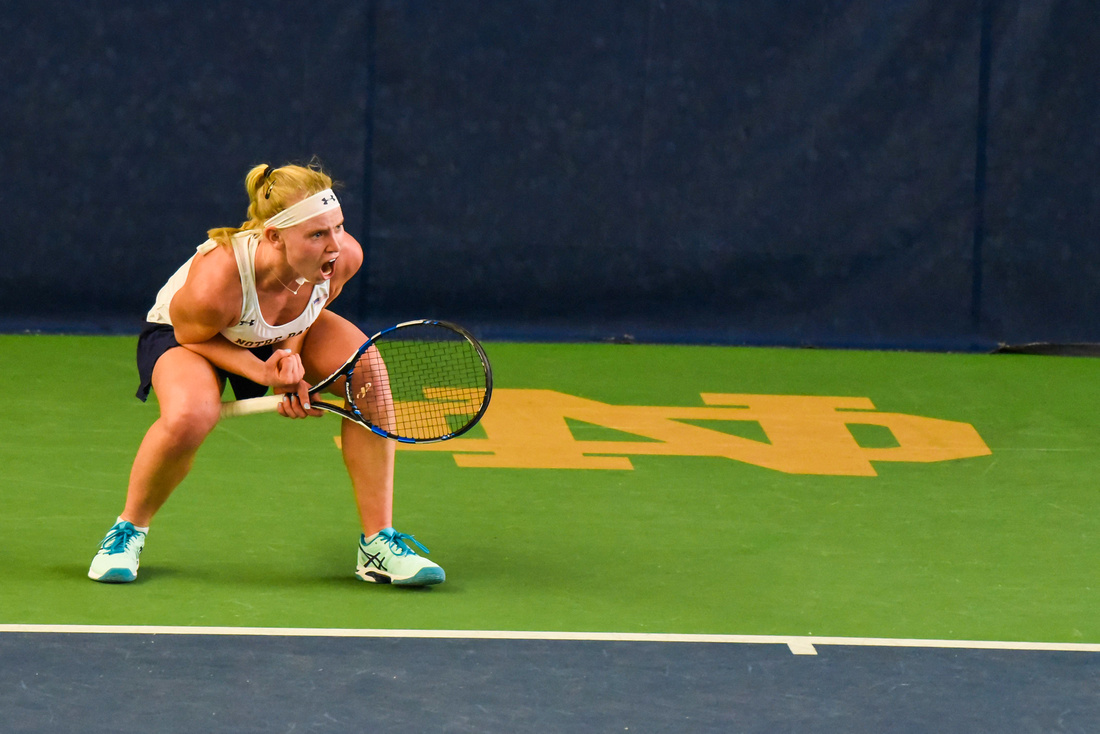 I mentioned a couple blogs and photos ago that tennis was one of my favorite sports to capture during my year with Notre Dame. That love did not stop with the men’s team. I loved capturing the women’s team just as much. They played with such passion, intensity and excitement every single match.

I was at pretty much every sporting event that Notre Dame hosted in 2018 and a lot of them included a lot of celebration since they would win majority of those events. That being said, from all those moments, this is a top five celebration photo that I love more and more each time I look at it. Cameron Corse was one of the best celebrators on the Notre Dame women’s tennis team. I mean nothing against the other girls, because they all knew how to scream and celebrate, but I think even they would agree (even though Rachel Chong would be up there as best as well). Corse just screamed so well, clenched her firsts and put her all into every single celebration.

I can still remember this match and moment as if it happened yesterday. It was the last singles match against Indiana and whoever won, took home the W for their team. What I love tennis is that when it comes down to the last match, both teams are on the court right next to them cheering on their teammates who are still competing. So you put the most intense and exciting celebrator in the clinching match and only good things can come! (Notre Dame did end up winning, however, that was a few sets after this photo).

So of course a great photo comes from a moment such as that, but I do not even know where to begin on why I love this photo so much. I'll start off with how I love the ND logo and how it is perfectly right next to her. Honestly, if it was not there, this photo not be on the list because I have tons of photos of Cameron and even her teammates screaming that are just as good, if not better than this one. Even so, not many top Corse and her exact celebration in this shot. The squatting down while clenching her fist that isn't holding her racket and screaming is just plain perfection.

It's one thing to scream while still standing as it usually happens, but to me this means that she really could not contain it and had to squat down to get every ounce of celebration out of her. There is so much intensity in her face which shows how much this means to her and in this one I am 99% she is looking over to her coach on the sideline to communicate her excitement. She can communicate so much with the celebration and I know that is what she is doing here.

Lastly, the photo is perfectly set up. With Cameron in the foreground facing the logo, your eyes flow perfectly from her, to the logo and there no confusion on where your eyes should look first. My eyes go straight to her and first thing I notice is her scream, then her fists, then the logo and my eyes go from left to right perfectly. That is key to a good photo and the key to this being a top photo.

Some games bring a lot more really good photos than others and a lot of factors play into that. Even though Columbia lost to Harvard (and i really do not want to mention the score..) I got some of my best photos of the year. Personally, I think the main thing that I loved from this game was the contrast of Columbia's white jerseys against Harvard crimson jerseys, which looked even better when I did my post editing. You would think a game where the weather was all over the place, such as this one where it went from sunny to raining to overcast, would not be a good game to get the best photos. Well it was and the weather is one factor that put this photo over the top.

That being said, this is the first of two photos that make this list from this game and look at that, they are in the top 10! This one looks like an average photo at first glance but this is something that I rarely get this perfectly and it has stood out to me ever since the game ended. What we have here is Columbia offensive linemen going up against Harvard’s defensive linemen, giving our quarterback, Ty Lenhart (12)  time in the pocket while he is looking down the field to throw the ball and then to top it off, in the foreground of the photo we see a wide receiver, Emerson (14) running his route to get open for the ball.

Seriously, I usually do not get EVERY aspect of a play perfectly in one shot. I can get the offensive line blocking for the QB and I can get the QB looking down the field and I can get the wide receiver running their routes, but to get it all in one photo, that is what makes this a top 10 photo of the year. Then, the weather adds to the shot as we can see rain and in my opinion, when you can see the drops coming down, it makes the photo all that much better. It is not easy to play in the rain and it is not easy for the QB to have to fight through the rain to see an open teammate. Which leads me to my next reason I love this photo; we can see Ty's eyes perfectly as they are up field looking for Emerson (14) and I think it gives the photo a good flow to the photo. You see Ty and the lineman and then his eyes bring our focus to Emerson, who is not in focus but is a key to this photo. I love the fact that he is out of focus because it gives the photo great depth and completes the shot perfectly.