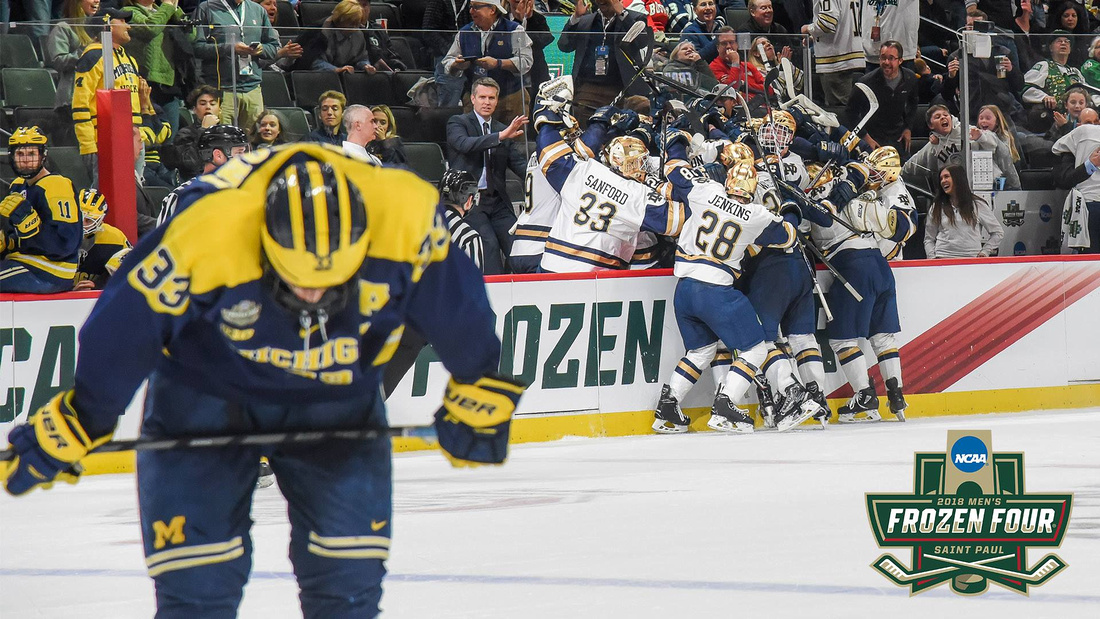 This one means a lot, for a lot of reasons. The first reason will be the same for this #2 photo as well as my #1; I am the only person that has this exact photo. Unlike basketball, where multiple people could get practically the same exact photo, since they are all sitting in a similar spot, hockey has photo holes that fit one person, which gives that one person the chance to get photos that no one else will get.

Other people can obviously get the same moments at the same time, especially at a game like this where there tons of photographers all over the rink, but they will not get it at the same angle and place since the holes are at the corners and side of the glass and aren’t close enough to each others for the photos to look the same at all.

That being said, no one else has this photo of Notre Dame hockey celebrating their goal with 4.8 seconds left against Michigan in the Frozen Four in Minnesota. Oh that was also cool, this was played at the Xcel Energy Center where the Minnesota Wild play their games. I’ll be honest and say I do not think I realized that at the time. That makes two professional hockey arenas I’ve shot in this year. Just another reason to love this photo.

Back to the celebration. When you first look at this, I hope you first notice the player leaning over in the front. That would be a defeated Michigan player which is why this is such a great photo. Getting Notre Dame celebrating is one thing, but to get an opponent, especially rival Michigan showing defeat, adds so much to the shot. I got a ton of photos leading up to this moment, such as them skating to the bench celebrating, but none of them compare to this one.

The emotions of both sides are shown so well, with the defeat felt by Michigan and the excitement pouring out of Notre Dame. When you look at the huddle of Notre Dame, the first thing that stands out is the one player screaming in the middle and not doing it towards his teammates, but towards the ice and in my eyes he is looking towards the Michigan team. Almost looks like he is staring right at the player bent over in defeat.

There are always two sides to every single sporting event and this shows that perfectly. Especially in a Frozen Four game where the winner goes on to the National Championships and the loser ends their season, each side feels their emotion so hard and it is shown very well in this photo. I do not think this moment or photo could have turned out any better. The way the Michigan player is blurred and the Notre Dame celebration is perfectly in focus could not have been better.

Lastly, this photo was used all over social media for the Fighting Irish and Notre Dame Hockey and that means so much to me. I can share this photo as much as I want. I can love it and will love it so much, but it will never be seen by as many people as it deserves to until it's shared by the official accounts of Fighting Irish and ND Hockey. So that will always mean so much to me, especially since Notre Dame had other photographers shooting for them, but the people in my department always make sure the best photos are used and the right people get credit., Even better is the fact that one of the photos before this exactly moment, was used on the banner that is now hanging up in the Compton Family Ice Arena in South Bend next to the Frozen Four banner. So now my photo, not this one, but one from the same moment, is going to be seen for years to come and is cemented in history. A game and moment I will never forget.