2019 is coming to an end. Over the past 12 months I took photos at over 150 games. Ranging from high school and college to professional soccer and youth baseball. There was rarely a game that I didn't take over a thousands photos at so that means I took over 150,000 photos in the past year. That's a lot. Therefore, it was a big task when I thought about choosing my top photos. I mean, even when you narrow it down to the photos I actually posted on my website, it comes to around 60,000 photos I'd have to go through (and i'm pretty sure i'm underestimating the number of photos). When I was going through my instagram to even begin the process, I realized this would be impossible to choose only 10 or even 20 top photos. That is when I realized I would have to choose my top photos for each sport as well as choose my top moments I was able to capture.

These are moments that I know the people in these photos would want to look back at these photos to remember the moment forever. A moment that I was honored to capture. A moment I was excited beforehand and even more proud after I captured it. This could be big game, a milestone or anything in between.

These are top moments 10 through 6

This is my 10th moment because out of all these top moments, this one is not as meaningful as some of the rest. The most meaningful part of this moment would be that this game is a very very big deal for both Harrison and Rye High schools and this was my first time capturing the rivalry. Leading up to this game I could not wait to capture every single second of it. It was the last regular season game of the season and it was only our second day game of the year. The first day game made some of my best photos of the year because of the sun and natural light. Therefore, I was excited to have this huge game not be at night with horrible high school field lighting. The day of "The Game" could not have been any better. It was a bit sunny sure but the sky was blue and it was the perfect atmosphere for a big game. The reason I decided to make this a moment and not put this photo as one of my top football photos can be broken into two reasons. 1. This game, even if Harrison did lose, was a huge moment of the year for me. Everyone kept telling me how huge of a game this was and that I needed to be prepared. 2. This photo that I chose for this moment, is one of my all-time favorite photos from the year & I don't think it would be fair to put it with the top photos and instead showcase it with this moment. That way it gets the recognition it deserves. The sky is beautiful with the clouds looking as if they are painted and the Harrison flag is the center of attention as the players run out onto the field in front of a full crowd. Then, Scofield (#51) in the front with the fist pump and the American flag being seen just enough in the back takes the photo over the top. To me, this is the photo that showcases Harrison perfectly.

This was the coolest moment of the year for me in the sense that it involves a Hall of Fame baseball player. Actually it involves the only unanimously decided Hall-of-Famer in MLB history. Mariano Rivera lives in my hometown of White Plains NY and was able to come out to the opening day parade for White Plains Little League (WPLL) and throw out the first pitch to kick off the season. He spoke to the crowd and took the time to take photos with the kids which is now a memory they will remember forever. I even got a photo with him, but my favorite from the moment is this one of him throwing the first pitch. Where you see all of the kids and adults surrounding him smiling in excitement as he also shows a smile as he releases the ball to a kid. It was the perfect way to kick off the 25th Anniversary season for WPLL and I could not be more proud of this photo of such an amazing ball player.

I usually only shoot high school sports, maybe some college. However, this past year I did get a chance to shoot some professional soccer because a good friend of mine works with Sky Blue which is the National Women's Soccer League team in New Jerssey and allows me to shoot a few games. This has allowed me to capture Carli Lloyd, Ali Krieger, Ashlyn Harris, Julie Ertz and so many more amazing professional soccer players. As amazing as capturing those players was and how much I love those photos, nothing beat this moment when Orlando Pride played NJ at Red Bull Arena. Sydney Leroux was a star of the USWNT years back. Then she had her first kid, Cassius who is now 3 and recently just had a baby girl six months ago. So she has been in and out of playing professionally since having Cassius. I did not realize that she had yet to play this season, or that she would even get the chance to play this season. I thought nothing of it when I saw her on the sidelines warming up with the subs. I hadn't realized she had the opportunity or that it had only been six months since giving birth. Then she subbed in the second half against Sky Blue. The whole moment was amazing but the real moment (or photo) that surpasses them all was Sydney kissing her babygirl Roux after the game with tears coming down her face. This just shows the love a mother has and all that she went through to get to this moment. To get back to "normal" after giving birth is one thing, but to come back to playing professional soccer, is a whole other thing and she did that. You can tell how much it meant to her and even if she never sees this photo, it is something i'm proud to have captured. She was a favorite player of mine when she played on the USWNT and I love following her and her family on social media, so this was a great moment to not only capture but to witness in person. This shows me to never give up.

It seems appropriate that following Sydney's return that a USWNT moment would be next. This moment happened over the summer after the amazing and historic United State Women's National Team won the World Cup for the fourth time in team history. They were awarded with a ticker tape parade through NYC. Thousands and thousands of people joined and celebrated these amazing women. I did not go the last time they won it in 2015 and I have regretted it ever since. There was no way me or my camera would be missing this one. I got there early enough to get a spot in the front by a barricade near the end of the parade. It made for a great place to capture the phenomenal women waving to their fans. The photos I captured were some of my favorite of the year just for the reason that these are athletes I look up to and have loved to watch compete for many years. However, the moment that blew this up for me was when Abby Dahlkemper, a defenseman on the team (blonde in the photo), posted this photo on her instagram. Out of all the photos she could have posted, she chose one I had taken during the parade! Every time this moment comes up I am still in disbelief she chose my photo to share for this amazing moment. Something i'll look back on and remember for the rest of my life. That day was already so memorable and fun just to see role models up close but then to have one of my photos seen by thousands of people, put it over the top. Abby gained a bigger fan that day. 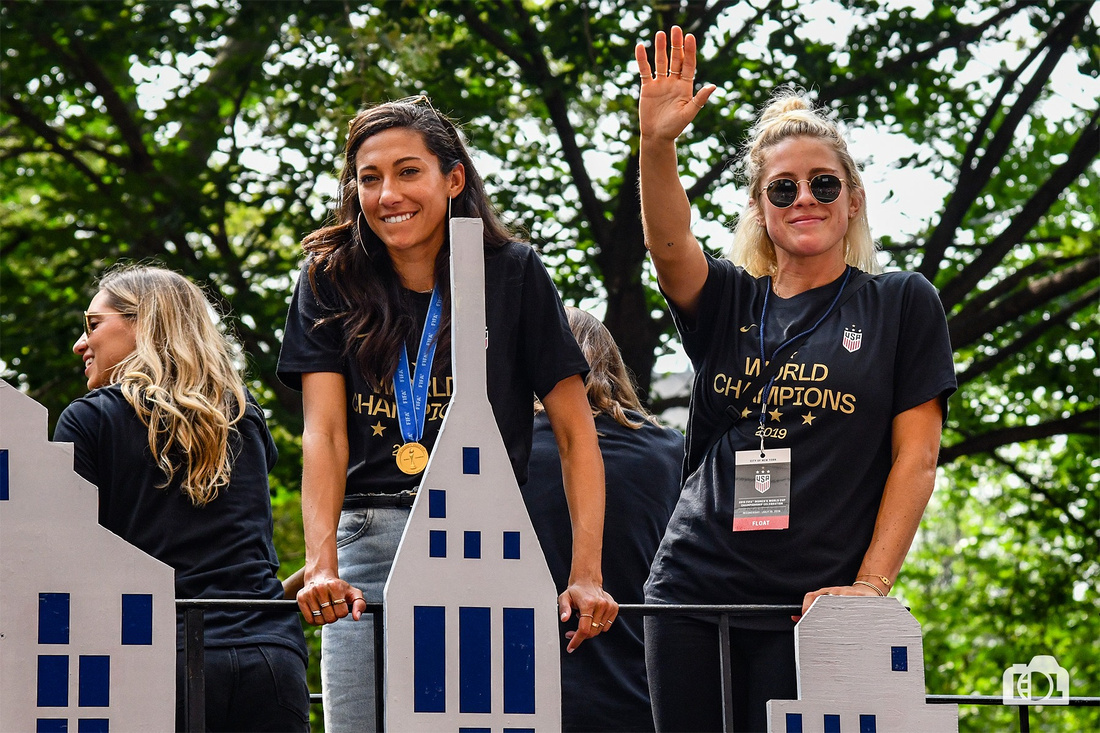 Next up on the list was a very fun weekend for me. As most of you probably know by now, I interned for Notre Dame athletics in 2017-18. It was one of the coolest experiences of my life. I got to capture every team there and that included Fencing, who happened to be National Champions the year before I came on board. They became back to back champs my year there. However, even when I left South Bend, I was still able to capture the fencers when they competed in ACC (Atlantic Coast Conference) Championship's in Boston last year. They are such a talented group of athletes but they would not get as much coverage as some of the bigger sports did around the Fighting Irish. I feel that is why I felt so connected to them. The athletes were so appreciative of my photos each time I captured them and even more so this year when they swept the ACC championships. That means both men’s and women’s team won the overall and each individual event for both the men and women were won by a Fighting Irish athlete. This was the first time this had ever been done. Luckily, I was the one there to capture every part of the historic weekend. I got all the points, screams, moments and emotions. That is why fencing is one of my favorite sports to capture; the emotion. The first time I captured the sport I couldn’t believe how much they screamed and I love to capture athletes screaming and showcasing emotion. Now when it's a championship atmosphere, all of that emotion intensifies. The whole weekend was one of the best moments. And what took it over the top was when the head coach for the Fighting Irish handed me an ACC Champions hat that the whole team got. That was something I did not expect but was very kind of him. I didn't even realize he really knew who I was but he saw what I did, appreciated it and because of that moment, this was an easy choice as a top 10 moment of 2019.

What wasn't easy was to chose a favorite photo for this, so I decided to choose two photos. One from the men’s side and one from the women. The first is Malcolm Fields who was a freshman last year and was a great celebrator/screamer. I know that sounds weird but he just celebrated in a way that comes off amazing on camera and is fun to capture. I would say that this picture shows why. The passion, the excitement. You know that every lift, practice, early morning or late night, is coming out in that scream (and jump). This was a celebration during day one of the championships which for the men overall team competition, but did he also took first place in his individual event of Sabre the following day. The second is the moment that the women's overall team took home first place. Amanda Sirico go her winning point of her match and that point gave her team the overall win. This is just a complete photo that I’m proud of. Amanda ripping off her helmet while turning to her teammates who jump and scream in joy with her. Even though this is an individual sport in the sense of competing by yourself, it is very much a team sport and if you do not win as an individual, the team doesn't win and this showcases that. I am glad we see the faces of the teammates more than Amanda's face because we see how excited they are for Amanda and themselves. 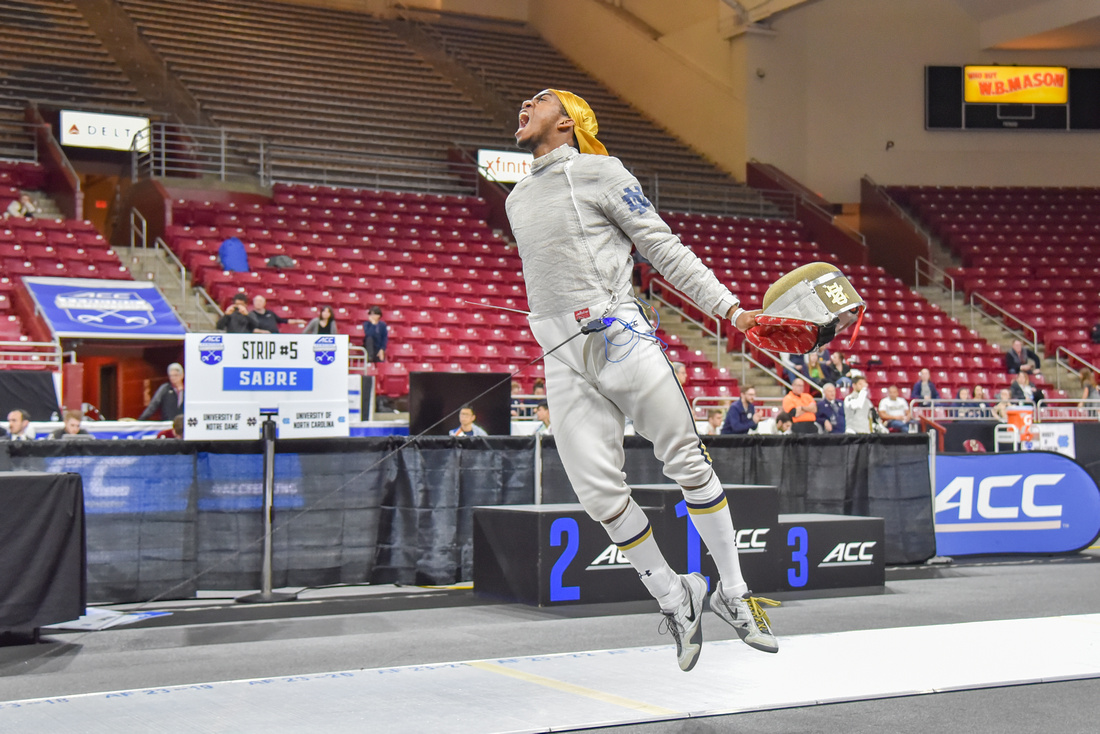 Come back tomorrow to see the rest!