Behind the Lens with EDL Week of March 24th

It's finally spring and that means all the sports are playing, my life is getting busy again and everything is getting back to normal as the weather gets nicer! I'm currently still an intern with Columbia football while I am also officially launching my business EDL Photography. So at the moment i'm starting spring ball with football while also shooting for multiple high school sports teams, and as always i'm freelancing for whoever needs it, especially when the Notre Dame Fighting Irish teams are in my area. That means I have tons of photos each week and I want to share my best of the best. Read on to see my four favorite from this past week of action!

This week of March 24th through March 30th I shot Harrison High School baseball, spring practice #1 for Columbia Football and ended it with Notre Dame Ice Hockey competing in NCAA regionals for a chance to go to the Frozen Four. 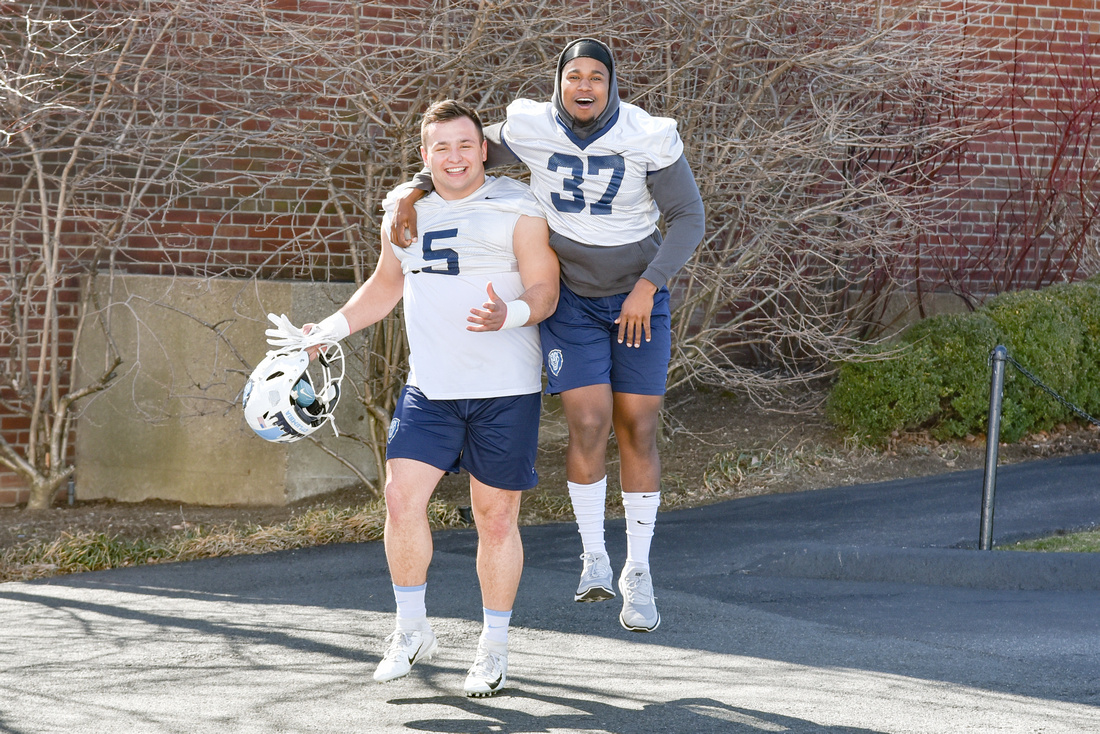 Columbia football is BACK! I, along with these knucklehead players could not be more excited for it! The boys had their first practice of spring ball this past Tuesday and it was a special day. I had just released a blog that explained how these football players healed my broken heart when they didn't even realize i had a broken heart. So I was pumped to see them and they were pumped to start practice. All that energy just came together when they came walking out to practice. This is where I usually get some of my best photos (it's my favorite part of practice) as they pose for me. These two in particular were my favorite of the day, just look at those smiles and that jump, you can feel the excitement and happiness through the screen! They were so excited to see me there for day 1 (or maybe they were just so excited for practice) and I was so thrilled they were already posing for me, since it had been a while since I had seen the players. Both of us hadn't missed a beat and like I said, we are back! There was no way this would be left off the list. I smile each time I see this photo. *I talked to Jalen (#37) yesterday at practice and we talked about this photo and he said "I was so happy to see you", so there you go. I feel honored I bring this much excitement out of them. 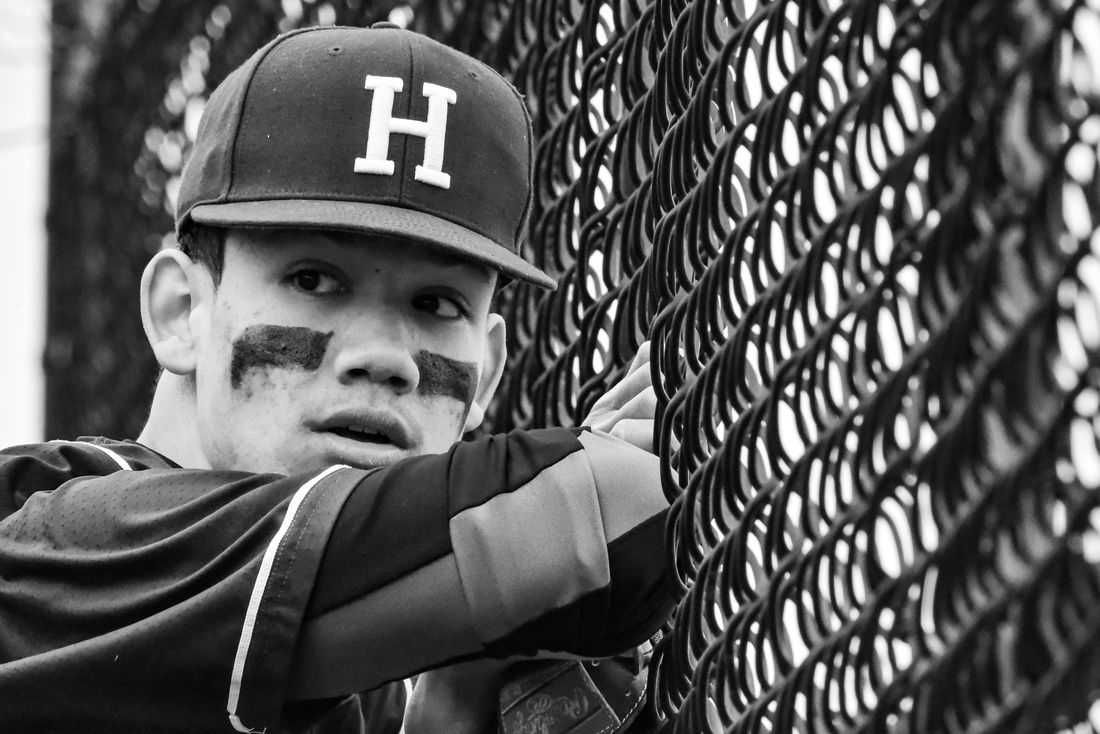 Harrison baseball was my first baseball game of the season and I couldn't be more excited to be around the sport again. After one game with this team, i'm even more excited to be capturing this group of athletes. I went to warm ups to get photos of every player I could. That way, even if they didn't play in the game, I had photos of them. This was a shot I got right before the game began. The players were in the dugout just talking, goofing around while waiting to start. This player in particular was just learning against the fence and I caught him at the perfect moment as he was looking over probably to a teammate or coach. The eye black and the concentration in his eyes make this so intense. I could not be more proud of capturing this. These are the type of shots that don't come along all the time so for me this is special. This is something that I had to create by just being in the right spot and more importantly, being ready. Making it black and white just enhances the shot along with the depth that is given by seeing the fence he is leaning on. Cropping a photo can make or break a photo and if I cropped the fence out, then it changes the whole shot. It's going to be hard to top this shot this season, but I cant wait to try! 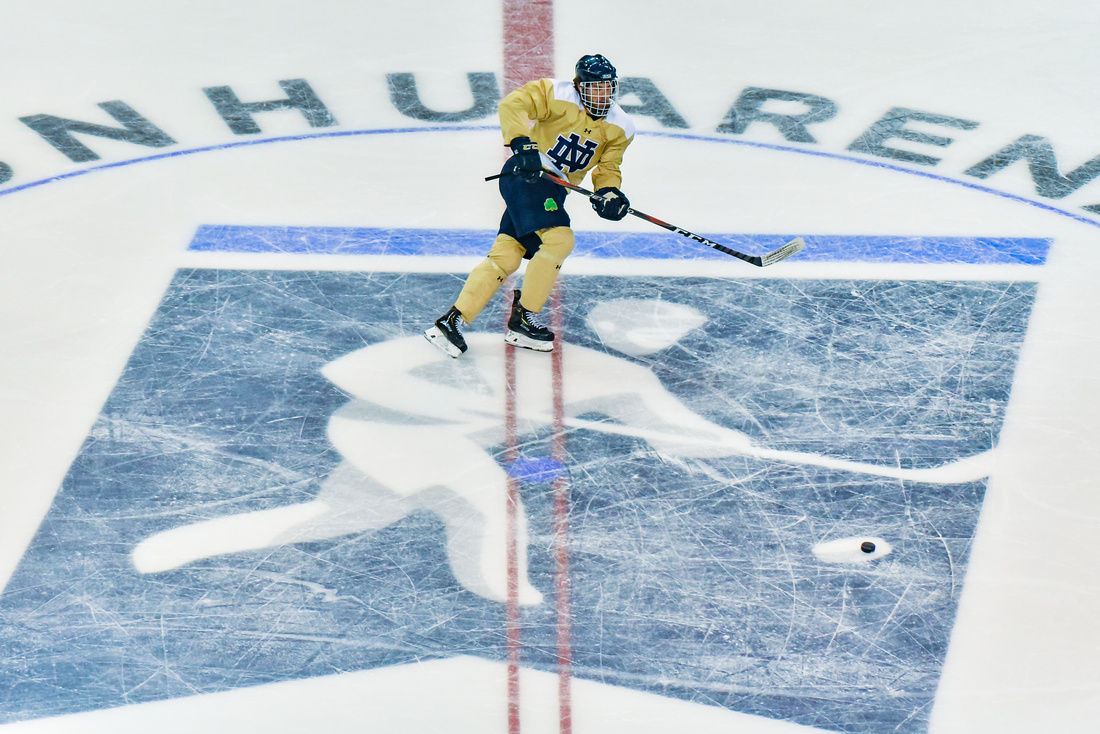 Notre Dame men's ice hockey was one of my favorite teams to capture during my internship last year. Ice hockey has become my favorite sport to capture and I have them to thank for that. They were just a fun group to shoot (that liked to win games in final seconds..) and it helped that they won and went to the National Championships and I got two of their best celebration photos of the year. That being said, I was so excited when I saw they were playing only a few hours away from NY for regionals, in New Hampshire! I was thrilled they said yes and hired me to be their photographer for the weekend or I would never have captured this photo which could go down as one of my best photos ever. (I know that is saying a lot..) I say that because I don't think i've ever gotten a photo that is more perfectly timed or luckier. The player is literally a perfect duplicate of the logo that is on the ice. His legs crossed over, the puck is directly over the puck and the stick is out! It can not get any better. I have stared at this photo longer than I like to admit, but that's what happens when something happens this perfectly. I can honestly say I could not get this again if I tried. 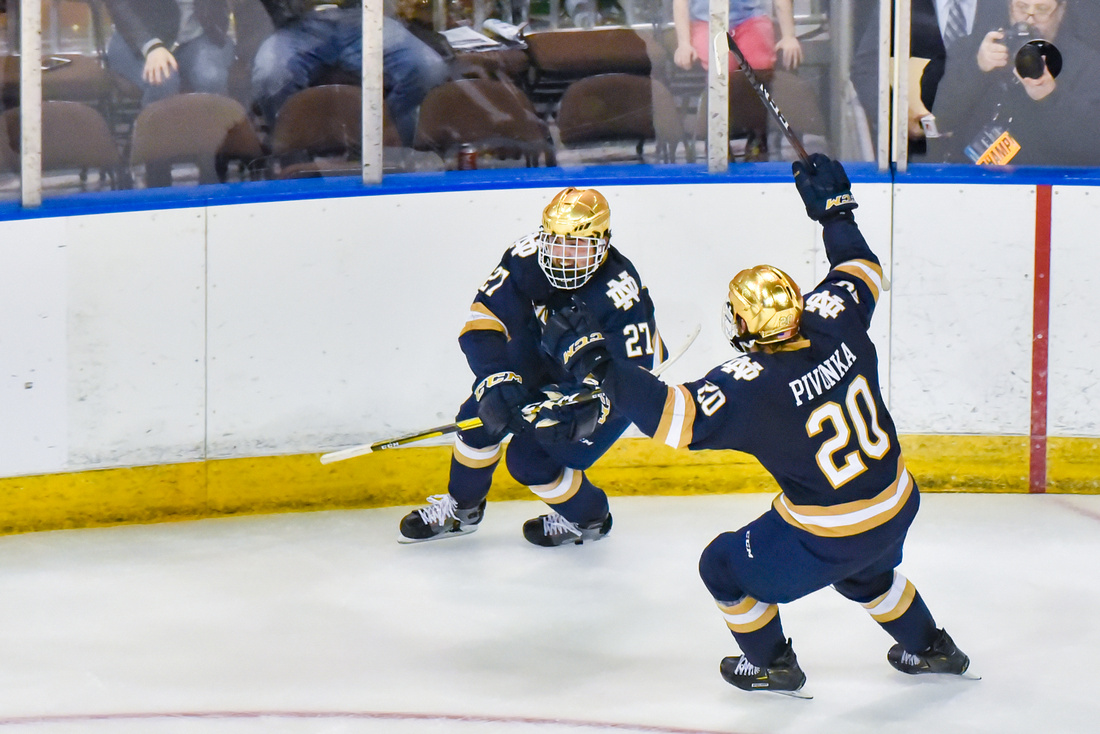 As I said before, Notre Dame hockey was one of my favorite teams during my internship. A big part of that was because of the excitement they brought. They did not win easily, they liked to wait until the last second or bring the game into overtime and then pull it out. Their regional game versus Clarkson on Friday night was no different. They went down early, tied it in the second and then went down shortly after. They didn't tie it until under 2 to 3 minutes to go when they pulled their goalie so they had a sixth man advantage. It worked because Bobby Nardella (#27) buried one top shelf and it was all tied up once again. This is the celebration from that game tying goal and I could not be more thrilled that I was in the perfect spot to capture this. Since I know how this team works, I decided to not get a photo hole on ice level for the third period. That way I could be way up high and have a higher percentage to capture the game tying/winning goal and celebration. I was right and wow did it pay off. I got the goal perfectly and then this whole celebration was perfect, but I kept coming back to this as my favorite shot. Pivonka's arms in the air as Nardella skates under him to go celebrate is just perfection. Look at that excitement and happiness on Bobby's face. That is exactly what sports is all about. That's everything coming together from a long season and being let out in one moment. They didn't disappoint and I was so happy I could capture such an exciting moment for them. Sports photography is a lot of luck but also about being prepared and ready. This had that perfect combination.